The Miller Family Farm: A Leap Into Uncharted Waters

After a long career in the construction business, Rob Miller, then a Madison, WI, resident, found himself at a crossroad when he lost his job during the 2008 economic downturn. During this time, his son, Jake, was working for a vegetable farmer. Jake’s work in the agriculture industry piqued Rob’s interest in how foods were being grown. “I realized that food is a commodity that will never go away,” Rob says. It was a realization that steered him and Jake to investigate alternative methods for farming. “And that led us to aquaponics,” Rob explains.

Aquaponics is the marriage of aquaculture (raising fish) and hydroponics (the soilless growing of plants) that grows fish and plants together in one integrated system. The fish effluent provides an organic food source for the growing plants, and the plants provide a natural filter for the water in which the fish live. This environmentally-sustainable method of farming is free of pesticides, herbicides, and fertilizers, plus it uses just one-tenth of the water expended in traditional field growing methods.

The Millers began working with Nelson and Pade, a Wisconsin aquaponic company, to learn everything they could about the technology. When trying to decide where to locate their operation, the decision was easy. “When I was a kid my favorite spot was Michigan’s Upper Peninsula to visit my grandparents. I love it up here,” Rob reflects.

In 2013, Rob, his wife, Dawn, and their three children all took a leap of faith into uncharted waters and moved their family to a seven-acre farm in Carney. Once owned by his maternal great grandparents, the farm is currently owned by Rob’s parents, Fred and Sandy. Purchasing a nearby additional 60 acres, Rob began construction on the fi rst building for the aquaponic operation.

The first shipment of 276 tilapia fi sh were delivered in 2014. It took them approximately one year to get the system operating at full capacity, growing both fish and produce. So, how does it work? The nutrient-rich water from the fish feeds the 200 lettuce seeds that are planted every day, six days of the week. Approximately 40 days later, the crop is harvested and ready to sell. The farm now produces several types of lettuce, kale, tomatoes and cucumbers. The produce is sold in 10 U.P. grocery stores, in addition to supplying healthy food to the Carney and Gladstone school lunch programs. This has all been accomplished with little to no advertising, but rather through word-of-mouth publicity. The quality of the produce advertises for itself, the Millers attest.

Still in its infancy, the operation will reach full capacity in five years when it is expected to produce 60,000 heads of lettuce and 70,000 pounds of tomatoes annually. Future plans include a certified kitchen on-site, so that they can sell the fresh fish, as well as constructing more greenhouses for crops, such as strawberries and peppers.

Family involvement weaves its way through the fabric of the farm with Rob’s son, Jake, handling fish operations, his daughter, Hannah, as a greenhouse technician, and son, Jon, as general help. Rob’s wife, Dawn, initially a bit reluctant at the prospect of relocation, adds, “Now that I’m up here, I love it. I love working on the farm. I’ve always enjoyed gardening, and this is just gardening on a different level.”

“I have to attribute all of this to my mom and dad,” Rob thoughtfully acknowledges. “They have been entrepreneurs their entire lives, and they taught by example. I saw first-hand their successes and failures and how they got through them. Those sorts of life lessons helped me through my own trials and errors with this business.”

Together, as a family, the Millers have traversed uncharted territory to be able to supply fresh, sustainable food throughout the U.P.’s four seasons.

Miller Family Farm is a member of Alger Delta Cooperative Electric Association. For more information on the farm, contact them at 906-639-2506, millerfamilyfarm2013@gmail.com or eatupmichigan.com. 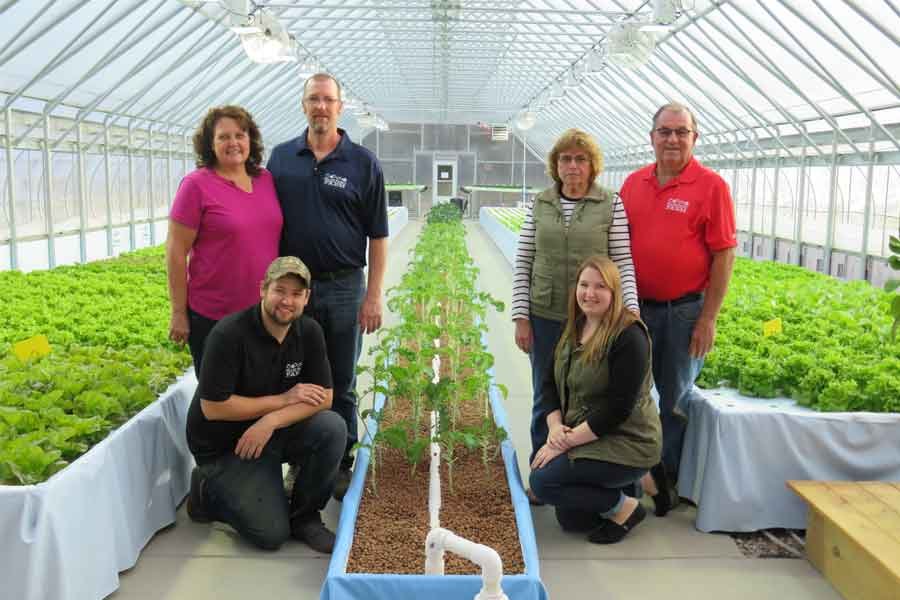